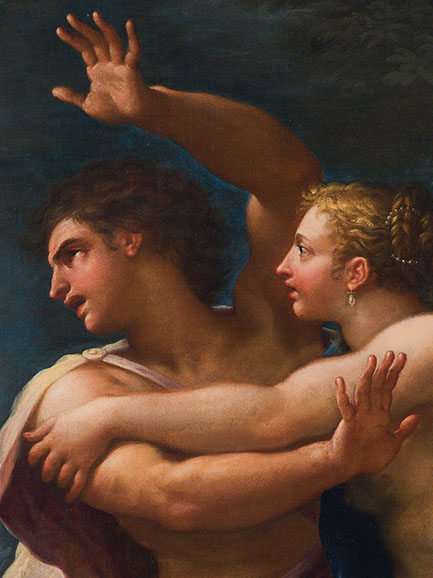 Salmacis and Hermafroditus. The painful and cruel voluptuousness

At the age of fifteen, Hermaphroditus, son of Hermes and Aphrodite, leaves the forests of Mount Ida where the nymphs raised him, and wanders through a mysterious and unknown Greece. Once in Lycia, he comes across a source of water so crystal clear that he can see the bottom. No reeds, algae or rushes grow there. Evergreen grasses surround its shores. Here lives the nymph Salmacis. She is already a woman, one obsessed with the narcissistic contemplation of her beauty: she combs her hair, she looks at her image reflected in the waters, she is pervaded by a ferocious desire yet she lacks someone to long for. On the other hand, Hermaphroditus lives in a prepubescent status, in which only adventure and exploration of unknown places count. Their fortuitous and explosive encounter triggers a drama that will change the destiny of both: feeling attacked by the propositions of the nymph, Hermaphroditus rejects her and tries to escape by swimming away in the water, thus falling into Salmacis’ spell. Despite the boy’s strenuous resistance, the nymph’s grip is invincible in the water. Salmacis prays the Gods never to separate her from her prey again. In the Metamorphoses, Ovid narrates: “two bodies merge together and cancel each other out in a single one. Like two branches growing and developing together if joined under the same bark, so, when their limbs merged in that tenacious embrace, they were no longer two but an ambiguous being who is not a female nor a young man, who has the appearance of both and of neither of them”. When Hermaphroditus realises that the stream has halved his manhood and has flushed his limbs, stretching his hands, and with a voice that is no longer virile, he exclaims: “Father, mother, as your son, who bears the name of both, I ask you this: every man who bathes in this spring, may he be halved. May he become effeminate as soon as he bathes in these waters!” Moved by the words of their son Hermaphroditus, his parents fulfil his desire by pouring an evil filter into the spring.
Since then, anyone who bathed in the spring of Salmacis would suffer the same fate. The conflict between the nymph’s ferocious desire and the boy’s condemnation to physical fusion with her – suffered and unwanted – is one of Ovid’s most sublime inventions: Salmacis’ desire is fulfilled but at the price of a terrible prodigy whereby the two characters merge into a hybrid.
The Sixteenth century loved the story of Hermaphroditus, as testified by the works by the Carracci and their school. The famous ancient sculpture of the Galleria Borghese, today at the Louvre, restored in 1620 by Gian Lorenzo Bernini, where Hermaphroditus lies down on a hyper-realistic mattress, struck generations of artists.
Paolo de Matteis (Piano Vetrale, Cilento, 1662 – Naples, 1728), was one of the most internationally successful Italian painters. From his apprenticeship with Luca Giordano to his trip to Paris in 1702 and his triumphant return to Naples, de Matteis expressed a complex personality, capable of moving from monumental Baroque political allegories to large altarpieces. From cycles of frescoes in the churches of Naples to paintings for demanding collectors-philosophers such as Antony Ashley Cooper, third Earl of Shaftesbury, for whom he painted a famous ‘Hercules at the crossroads’. De Matteis was educated and ‘literate’, and his ‘Salmacis and Hermafroditus’ – a luxurious painting for a large aristocratic gallery, executed around 1690-1700 – is a proof of this: Ovid’s story is visualised by reversing the roles of another dramatic love story: Apollo and Daphne. Bernini’s marble group at the Galleria Borghese inspired de Matteis who was fascinated by the idea of two people chasing and escaping. However, here the one who escapes is a boy, while a young woman holds him with the lightness of a superhuman force. De Matteis’ Arcadian culture lends the painting a refined taste. The sumptuous drapery of the two figures fragments into plastic folds. The powerful anatomies, stretched out in an effort that reminds of an embrace rather than a struggle, show Annibale Carracci’s perfect knowledge of many details of the Galleria Farnese. The water of the spring, the medium of the spell, is a piece of extreme pictorial virtuosity. In his continuous comings and goings between Rome and Naples, de Matteis achieves an elected classicism, aware of the academic line of Carlo Maratti yet extremely individualised.
The solitary landscape projects a soft light on the figures. The two ineffable heroes represent the drives that mark the story of Salmacis and Hermaphroditus, and also express the indifference of the Gods for the dramas caused to men by their games with the whim of fate.
It is curious that one of the most faithful musical transpositions of Ovid’s tale, which is still so modern today, is the one by Genesis (‘The Fountain of Salmacis’, 1971), more than Sylvano Bussotti’s ‘Hermaphroditus’ (1999).