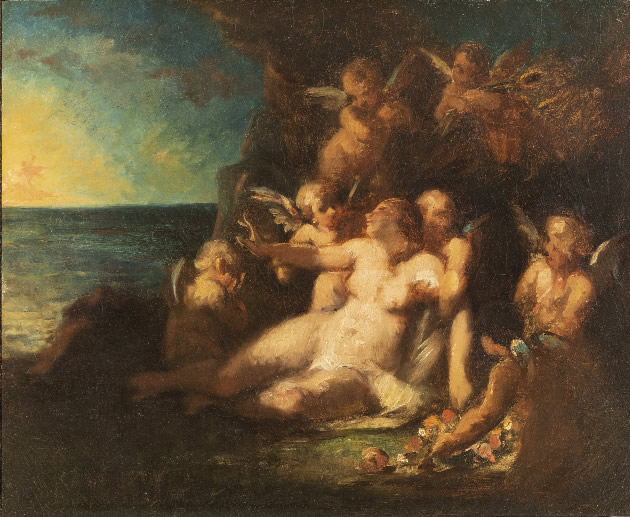 Expressive vitality and shrunk sketching, supported by a virtuous creative talent, are the precious characteristics of this rare sketch by Giovanni Battista Crosato (Treviso, 1697 – Venice, 1758) depicting “Clizia abandoned by Apollo”, which reflects a precise reference to the mythological scenes depicting the stories from Ovid’s “Metamorphoses” kept in Palazzo Madama in Turin, which for their quality and preservation can be considered a precious testimony to his pictorial art.

Originally from Treviso but trained in Venice, the artist has left little evidence of his early activity. His first known works date from 1706 with ‘The Flagellation of San Marcuola’, followed at the end of the third decade by the works, now destroyed, for the Church of Santa Maria dei Servi.

In 1733, he was at the service of the Court of Savoy, where he painted several frescoes in the Palazzina di Stupinigi, the Villa della Regina and the Royal Palace. He was registered at the Fraglia dei pittori veneziani (Venetian painters’ guild) from 1736 to 1752 without interrupting his fruitful relations with the House of Savoy.
After a ‘gloomy’ beginning, he developed an original eighteenth-century style that elegantly blended examples of Piazzetta and Emilian teachings, reworked with the best pictorial texts of the early eighteenth-century in the lagoon, which can be seen in all their splendour in this delightful pictorial sketch.