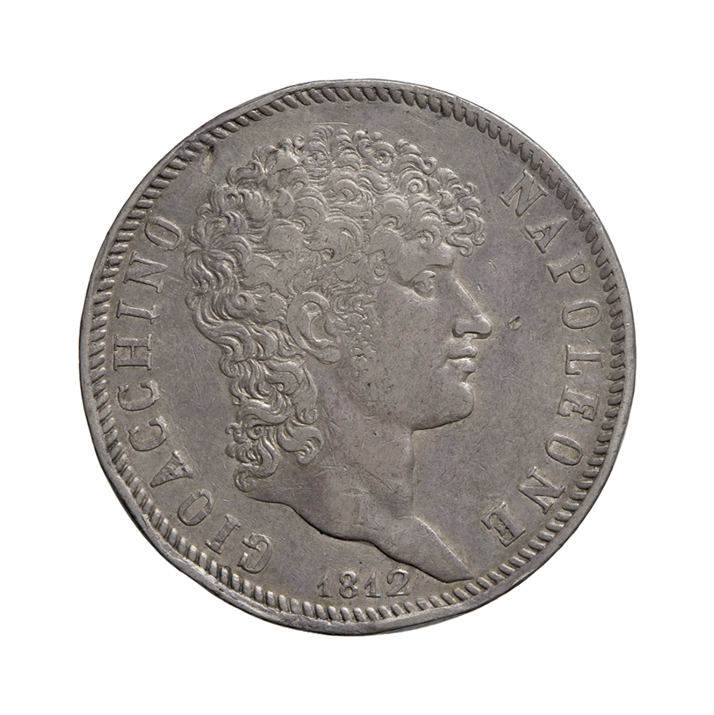 The next auction of Coins & Medals will present one of the great rarities of the Neapolitan coinage of the Nineteenth Century. This is the 5 lire 1812 minted in Naples under Gioacchino Murat.
After the failure of the Revolution of 1799, the Neapolitan city experienced another revolutionary phase that was a watershed between the ancien regime and the modern era.
In this period, the name of the kingdom changed into Kingdom of the Two Sicilies (this name also appears on the coins).
Since the time of the Normans, the kingdoms of Naples and Sicily, although de facto united, were legally distinct. For example, Ferdinand was IV in Naples but III in Sicily.
Joachim Murat, cavalry general and then marshal of Napoleon with great military skills, married Maria Annunziata Carolina Bonaparte and succeeded Joseph Napoleon in 1808.
The Murat coinage is divided into two periods: from 1808 to 1810, the coinage with the usual system of Ducati, Grana and Cavalli continued so as not to disrupt the commercial transactions of Neapolitans.
From 1810, however, Murat introduced decimal coins in addition to those already circulating under the old system. This was to allow transactions and commercial exchanges with other countries in line with the coinage of the French Empire. These first issues, very rare, with value expressed in francs, were replaced from 1812 with coins based on lire and cents.
It was decided that the denomination should bear the motto: “God protects the Kingdom”. The head of the sovereign was turned to the right in silver coins, while in gold and copper coins to the left.
The content of the silver was to be 900 thousandths.
The new system did not meet the favour of the Neapolitans, accustomed to a different system of counting, so at the end of Murat’s experience, in 1814, the decimal system was abolished and the one in force before 1810 was re-established.
This very rare 5 lire coin was minted in not even 3000 copies.