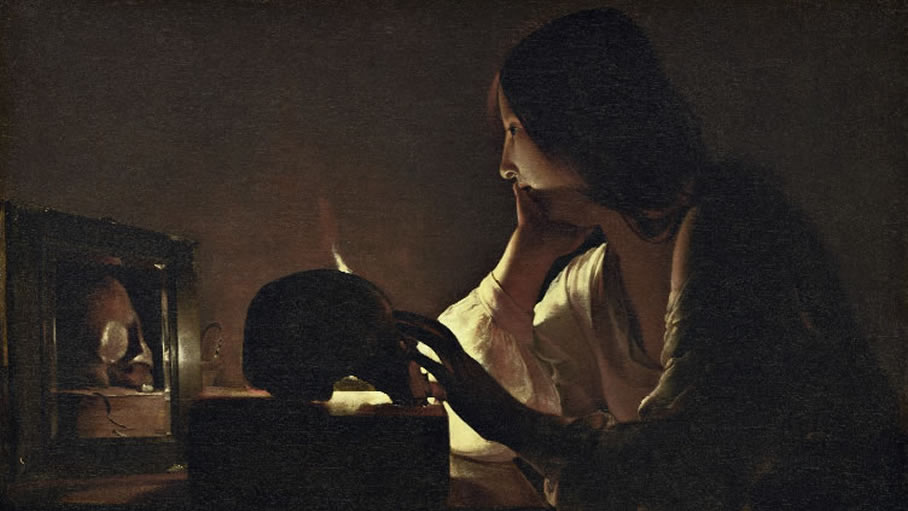 Georges de La Tour, time and space are suspended between light and shadow, which emerge from the faces marked by life, and by absorbed and silent figures lit by a candle, the symbol of a peaceful Christian transcendence. From Caravaggio’s lesson, the Lorraine artist does not learn Merisi’s unredeemed restlessness, but rather the dramatic, theatrical sense of composition and the careful study of light.
La Tour’s humanity is unconventional and often lost: the models he chooses for his sacred or mythological subjects are inspired by the people, his saints have no haloes and are taken from the street. They are beggars or lower-class people.
The corpus of his works is very limited, and includes small or medium-format paintings, intimate, with no landscape background, nocturnal and almost monochromes with a simplified geometric layout, especially in his last creative phase, which is still very modern today.
The exhibition “Georges de La Tour: l’Europa della luce”, hosted at Palazzo Reale in Milan until September 27, 2020 promoted and produced by the Municipality of Milan Cultura, Palazzo Reale and MondoMostre Skira, is curated by Francesca Cappelletti and Thomas Clement Salomon. The exhibition includes fifteen works by the French master of the forty attributed to him, including the moving Magdalene with Two Flames of the National Gallery in Washington, where the subdued beauty of the woman with her hand resting on the skull and lit by a faint candle flame, is a poignant testimony to the ephemeral and transient nature of life.