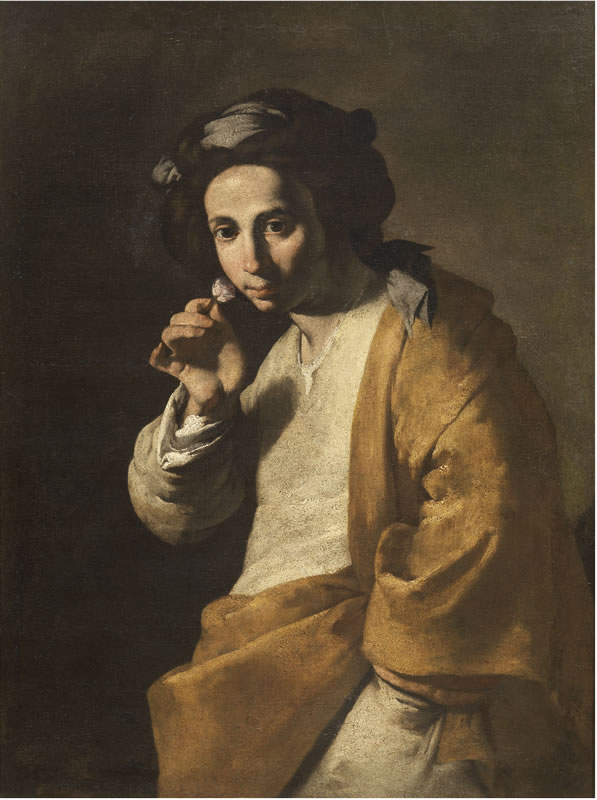 The exhibition “Dopo Caravaggio. Il Seicento napoletano nelle collezioni di Palazzo Pretorio e della Fondazione de Vito” – inaugurated in Prato on December 14th 2019 and extended to 6 January 2021 – presents, for the first time to the public, an important group of paintings from Giuseppe De Vito’s collection, now belonging to the institution that bears his name.
The “Fondazione Giuseppe e Margaret De Vito per la Storia dell’Arte Moderna a Napoli” is Giuseppe De Vito’s liveliest legacy. His passion for seventeenth-century Neapolitan art has been at the heart of his constant activity as a scholar, collector and patron, which he carried out in parallel with his profession as an entrepreneurial engineer.
Founded on May 5th, 2011 in the ancient mansion in Olmo, near Vaglia, on the hills overlooking Florence, it was only at his death in 2015 that the collection of paintings kept in the Milanese residence as well as the entire library, photo library and archive reached the institution.
As De Vito pointed out in the introduction to the statute, the aim of the Foundation is to make available to the community, and especially to youngsters, the paintings, documents and materials he collected, in order to promote and enhance the highest season of Neapolitan art. The Foundation was thus created with a specific vocation, which sets it apart in the panorama of similar bodies, just like De Vito’s peculiar personality and his activity in the historical and artistic field. Here, he had made his entrance as an outsider at the end of the sixties, leaving a significant trace with seventy-two scientific contributions published between 1974 and 2013, which won him a prominent place in the critical historiography of twentieth-century Neapolitan art and the genre of still life.
“The engineer lent to the history of art”, as he ironically loved to call himself, was born in Portici (Naples) on October 2nd, 1924. He lived in Naples, where his cultural roots and artistic taste were, Milan, where he moved in 1952 and where he set up an important company in the field of telecommunications, and Florence, where he spent the last years. Here, he died in 2015, in the country house purchased in 1980, which later became the headquarters of the Foundation.
A brilliant mind, in 1954, after having patented some components for the transmission of radio and television signals, he started a fortunate entrepreneurial activity while cultivating his interests in art. In the mid-sixties, he began to collect and study the paintings he bought. His scientific and systematic approach combined his interest in the documents and technical aspects of the work with the recognition of its aesthetic quality and Longhian connoissership. After a few forays into northern seventeenth-century painting, he devoted himself, with a coherent and univocal choice and a “visceral” passion, to Neapolitan seventeenth-century painting, acquiring important paintings on the antique market and from private collectors that documented the Neapolitan Caravaggio naturalism.
A decisive factor in his growth as a scholar was his meeting with Raffaello Causa, superintendent at Capodimonte and one of the greatest scholars of Neapolitan art, which led to close relations with all the major Italian and foreign specialists of the seventeenth century. The first articles published and his participation in the two major exhibitions on seventeenth-century Neapolitan art Paintings in Naples 1606-1705 from Caravaggio to Luca Giordano, (London, Washington, Paris, Turin 1982-1983) and Civiltà del Seicento a Napoli (Naples 1984-85), where he was among the organisers, lenders and authors of the catalogue, consecrated De Vito a collector and scholar. In that fervent climate of research, his entrepreneurial mentality sensed the need for a tool to enhance the documentary research and studies launched. That’s why he founded the annual periodical publication Ricerche sul ‘600 napoletano published since 1982 and directed until his death, which represents a constant and original point of reference in the field. De Vito’s pioneering articles on little-known or misunderstood artistic personalities alternated with the contributions of renowned scholars, young researchers and talented archivists. Since 2011, it has become the annals of the Foundation with the title Ricerche sull’arte a Napoli in età moderna, which attests to its extension to the fifteenth-nineteenth centuries. Its publication, now in its thirty-third issue and enriched in its illustrative and editorial form, is today one of the institution’s main activities.

At the same time, following the example of great connoisseurs such as Roberto Longhi, De Vito collected a rich photo library with thousands of images of seventeenth-century Neapolitan works acquired from the antique market, private collections and museums around the world or which are the result of specific photographic campaigns.
The heart of the Foundation is the collection of sixty-four Neapolitan seventeenth-century paintings, representative of many of the most important artists of the century, from Battistello Caracciolo to Luca Giordano. It is not the result of skimming over a large number of purchases but of precise choices guided by the immediate recognition of the quality and interest that the paintings showed in the eyes of the scholar. The collection perfectly reflects the close interweaving between the collector and the art historian with a two-way link in which the purchase of the work sometimes followed, others preceded and stimulated the study. It was a sort of ‘laboratory’, a work in progress, which brought aesthetic enjoyment to the collector but also stimulated his reflections. Each work was a precise piece in his reconstruction of the Neapolitan art scene. For this reason, and escaping from any speculative intent, he never resold any work.

An example of this link is the nucleus of no less than four paintings by the Master of the Annuncio ai pastori (Announcement to the Shepherds), including the canvas with Giovane che odora una rosa (Young Man Smelling a Rose), one of the most representative of the anonymous painter of which De Vito was one of the greatest exegetes. The presence of San Giovannino by Battistello, Sant’Antonio Abate by Jusepe de Ribera and the young San Giovanni Battista nel deserto (Saint John the Baptist in the Desert) by Massimo Stanzione, examples of the naturalist vein of the first decades, together with works by Francesco Fracanzano, Paolo Finoglio, Giovanni Ricca. The extraordinary Santa Lucia, a masterpiece by Bernardo Cavallino which, with Sant’Agata by Andrea Vaccaro and the large altarpiece with Cristo e la Samaritana (Christ and the Samaritan woman) by Antonio De Bellis, represents the pictorial evolution of the mid-century and De Vito’s pioneering studies on these artists. The paintings by Aniello Falcone and Micco Spadaro, which exemplify the painting of small figures and the genre of the battle; the works by Mattia Preti, including the Neapolitan masterpiece of the Scena di carità con tre fanciulli (Scene of Charity with Three Children) and the enthralling Deposizione di Cristo (Deposition of Christ) of the Maltese years. The four canvases by Luca Giordano document the particular interest in the artist to whom De Vito dedicated seventeen contributions, giving back a different physiognomy to his youthful period with great critical acumen. Thus, the large group of still lives of the greatest Neapolitan painters of the genre, from Luca Forte to Recco, Paolo Porpora and Ruoppolo, best represents his predilections and one of the fields where the scholar produced the greatest and most renowned critical results.

After De Vito’s death, the intentions of the President Notary Giancarlo Lo Schiavo and mine, already designated by the founder, were to continue his will, making his figure known and enhancing, first of all, the publication of the annals and the collection, promoting its use and study through exhibitions and the planned publication of a scientific catalogue. In addition, the catalogue of the library specialised in Neapolitan and seventeenth-century art will be put online, also with rare and miscellaneous editions, together with the digitalisation of the photo library and the possibility to consult the fund that De Vito acquired from Antonio Delfino with transcriptions from documents of the Archive of the Banco di Napoli of the seventeenth and eighteenth centuries.
De Vito’s clear intent to support research and young people is a priority mission for the Foundation, expressed in recent years both by contributing to publications on modern art in Naples and by awarding research grants in collaboration with Italian and foreign universities and institutions.
Through these instruments, following the innovative and technological spirit that has always distinguished De Vito’s choices, the Foundation wants to be a point of reference for studies on Neapolitan art as well as for the support of young scholars in the field.