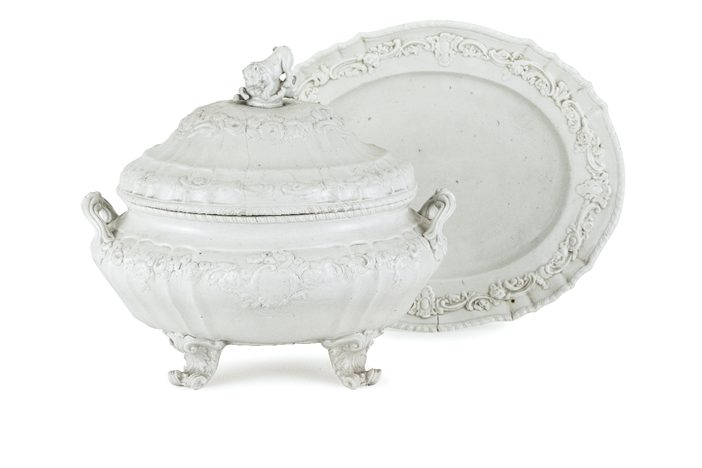 Zuppiera in porcellana bianca Manifattura Ginori a Doccia, circa 1745
Aggiudicata a € 5.580

Porcelain, maiolica and glass have continued to represent, over the last few years, a highly interesting niche segment, further improving on the previous performances as demonstrated in the 56.9% figure of lots sold with 109% of lots sold in terms of value. There was no lack of significant results in 2016, mostly concerning what is, most probably, Italy’s most important porcelain manufactory, Doccia. A rare pair of maiolica vases in blue and white made by the Ginori manufactory in Doccia in around 1755 went under the hammer at 6,200 euro and a white porcelain soup tureen – also by Doccia – highly decorative and dated to around 1745 – was sold for 5,580 euro. Last but not least, in a private treaty sale, an important allegorical group in polychrome porcelain by Doccia from around 1770, in Rococo style, showing the Three Fates was purchased by an Italian collector for 25,000 euro. The porcelain group is a typical example of the style of the Baroque period in the Tuscan manufactory and is most probably part of a series with two other deser groups now kept at the Paul Getty Museum.