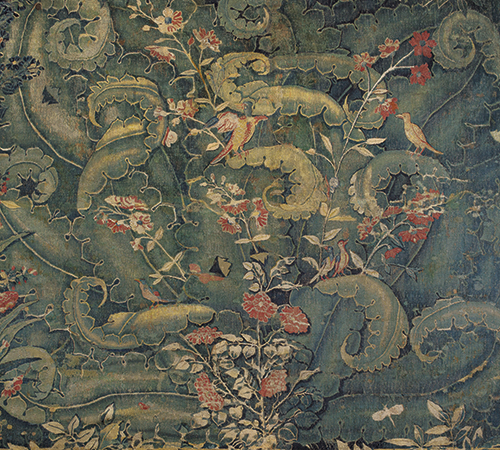 Beauty in the weave

With a carpet or an antique rug it is possible to understand the history, the taste and the culture of a people who in past – or more recent – times have produced in their weaves and their wefts and with creativity and with passion an object that is unique and timeless.
Tapestries – those pictures made of beautiful cloths – were symbols of European aristocracy from the Fifteenth to the Seventeenth centuries and performed two important functions. They protected from the cold and extolled the magnificence of those that possessed them.
Nowadays, tapestries that we invest in range from the feuille de choux, decorated with large leaves, and the mille fleurs, with small images of flowers and grass on a dark back ground. Small medieval tapestries represented Courtly scenes.
The feuilles de choux tapestries (with large-leaf vegetation) were of Flemish manufacture and evoked the fairy-tale world of a lost Eden. They were intended as a series or as single examples for the nobility who purchased them in order to furnish some of the rooms in their princely residences with a feeling of warmth. They may be classified according to the types of plants represented or on the basis of the presence – or not – of certain figurative and animal elements, be they feline in nature, or dragons or gryphons or unicorns. All the images were taken from the bestiaries of the time with differing figurative and allegorical significance. The weaving technique most commonly used was a chain of five or six threads per centimetre and a woollen weft with very few silk threads being used.
The colour range was reduced to a relatively scant number of greens, blues and yellows and – exceptionally at times – the red of the ranuncolus clementis would burst onto the scene, a colour used in the most splendid example of feuille de choux from the mid-sixteenth century (1550-1600) onwards which will be put under the hammer during the next Sale on November 24th. In terms of elegance and abundance of the most delicate details this tapestry – passion flowers, cornelian cherry, poppies and oak branches alternating with large baskets of large pieces of fruit all along the rich balustrade borders with five little coloured birds and a butterfly further livening up the scene – can more than compete with the most sumptuous of storied tapestries.
Another work depicts fourteen large flowers in orange and wisteria pink spring from a climbing bush of a golden hazelnut in colour adorned with little flowers and blue buds. The scene is enriched by a grate of emerald green foliage and decorates the highly original and unique Shakhrisyabz Suzani, made in approximately 1850 in Uzbekistan. It is large in size at 228 cm x 170 cm and, in terms of levity and chromatic harmony is a masterpiece