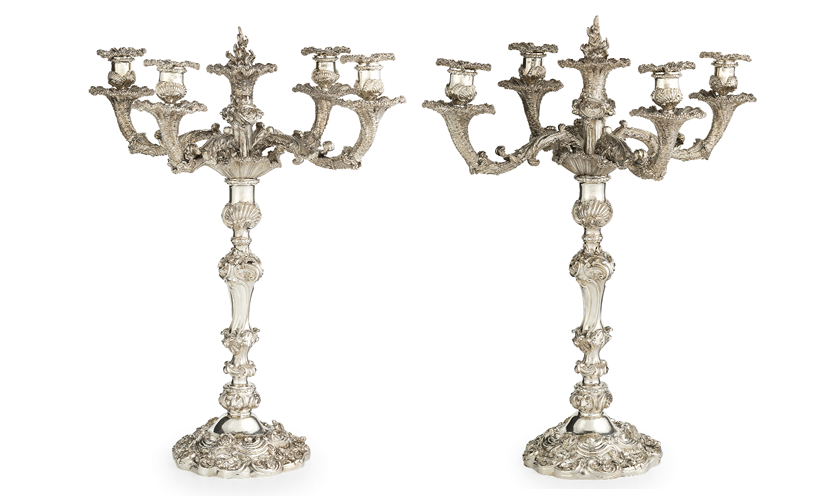 In the history of English silverware in the Eighteenth and Nineteenth centuries, Paul Storr was one of the most important protagonists on account of his expressive vivaciousness in the way he worked silver. His style soon became inimitable. All the pieces created from 1803 onwards with Philip Rundell (1743-1827), one of the period’s most famous silversmiths who he worked with for twenty years, followed by a collaboration with John Samuel Hunt from 1826, express a reaction to the rigorous purity of English Neo-Classicism by means of using decorative and vegetable elements of a strong Rococo flavour which stemmed from those vaguely Rococo designs that from the very beginning of the Nineteenth century had expressed the splendour and the power of Great Britain’s colonial empire.

In the forthcoming auction of Silver, Icons and Russian Works of Art on May 15th, four pieces by Paul Storr are being offered. All four are highly representative of his unequalled style. The first piece is a pair of silver candle-holders with four arms from 1826 with animalesque decorative elements. Enriched by a series of spirals and shell patterns, the arms possess naturalistic elements and the candelabras weigh more than twenty kilogrammes. The second pieces are represented by two ice-buckets in silver from 1820, with a circular base and flared body, with handles attached by mascarons, whilst the third piece is another ice-bucket from 1831, in the shape of a bucket with trompe l’oeil decorations and with an engraved family crest. Lastly, the fourth piece is a spectacular pair of wall plates with a forty-eight centimetre diameter and weighing over seven kilos. Circular in shape with borders of shells and naturalistic elements, the plates possess central plaques depicting scenes representing Titanomachy and the Niobids in a frame of swans in a landscape of plants: they bear the marquesses of Londonderry crest.