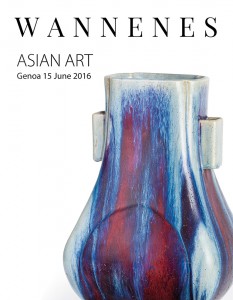 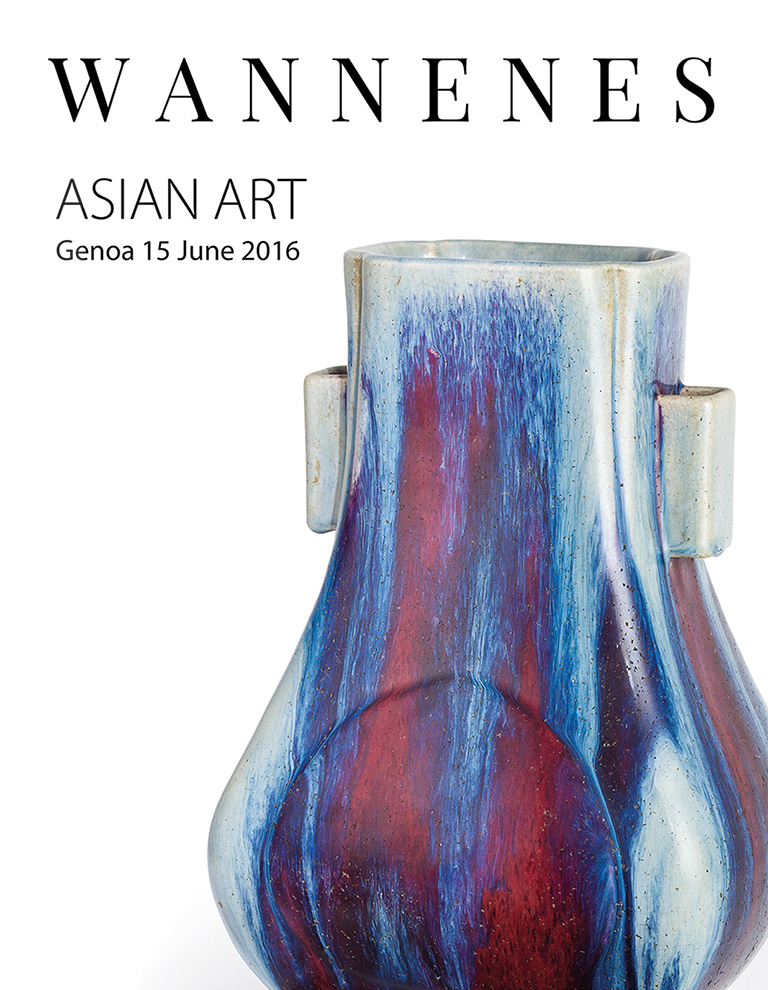 Stoutly potted with a slightly short foot rising to a low rounded sides with thick walls, painted in under-glaze blue in the fifteen-century style, with a broad lotus scroll issuing six larger blossoms wreathed by dense curling foliage, between a border of crested waves at the rim and a band of 'S'-shaped scrolls encircling the foot, all divided by single or double lines, the interior and the base left in white, the foot ring unglazed, inscribed in under-glaze blue with a six-character reign mark written in a horizontal line within a double rectangular panel below the rim. In very good conditions, very minor firing imperfections slightly pronounced in the mouth rim, and light surface wear and scratches.
29 cm diam., 12 cm high
Stima € 20.000 - 25.000 Based on archaic bronze form, the pear-shape body of rectangular section rising from a spreading foot to a quatrefoil rim, set at the shoulder with a pair of rectangular lug handles and the two main sides molded to the front and back with a raised peach-form panel, covered overall with a lustrous glaze of violet-purple tone with broad lavender creamy streaks, thinning to a buff color at the rim and along the edges, the base incised with a six-character seal mark and further applied with a brownish glaze with russet patches. In very good conditions, very minor wear and scratches, the glaze all over is crackled.
30 cm high, 18,2 cm large
Stima € 24.000 - 30.000 Lovely carved in high relief to depict a dense continuous scene, of a landscape formed by jagged rocks, trees, pavilions and wispy clouds above mountains, with in first plan some sages and scholars that passing over small waterfalls among cliff and plants, walking on their way to a complex temple in the distance, surrounded by rocks, wutong and pine trees under a cloudy sky; the back side show a great and wide opened scene of a large river landscape punctuated by mountains, hills, trees, reefs, houses and pavilions all painted in gilding. In very good conditions, with very small wear on the surface an scratches and some areas polished on the edge of the rims.
64,5 cm diam.
Stima € 25.000 - 30.000